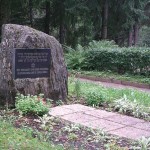 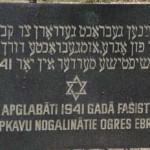 When the Nazi troops entered Ogre in July 1941, all Jews were moved to the former police precinct (12 Brīvības Street) and had to work in private farms. On 31 July all Jews were taken to the Preceni Ravine (approximately 600 m from Ogre), where the local self–defenders, lead by SD representatives, shot them (approximately 44 persons in total).

In 1965 the Jews shot in the Preceni Ravine were secretly reinterred in the Ogre Cemetery. Only in 1991 a monument was erected at the site of reinterment, it bears an inscription in Yiddish and Latvian: “Here rest the Jews of Ogre, killed by fascist murderers in 1941”.