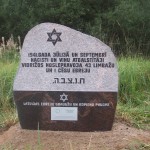 In 2006 at the site of murder near the Aģe River the Council of Jewish Communities of Latvia, with the financial assistance of the European Union and the Latvian Society Integration Foundation, erected a monument with an inscription in Latvian “In Vidriži in July and September 1941 the Nazis and their supporters murdered 43 Jew from Limbaži and 1 Jew from Cēsis”.