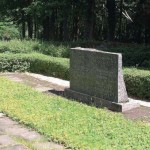 On 6 July 1941 local self–defenders in Pāle village began shooting Soviet activists, among them also three Jews were killed at the Parish Council House – Max and Isaac Gottlieb and Max Goldblatt.

In 1965 the victims killed at the Paris Council House were reinterred in the Pāle Cemetery, where a monument was erected – a stele in granite with the names and surnames of the deceased and a quote by J. Rainis in Latvian: “You broke us, oh, hostile enemy”.