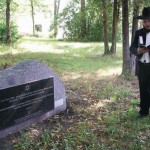 At the beginning of July 1941, when the Nazi troops entered Bebri parish, 6 Jews of Bebri parish were shot in a forest (approximately 8 km from Vecbebri).

The site of murder in the forest is extremely overgrown and impassable; therefore the Council of Jewish Communities in 2006 erected a monument to the victims in the centre of Vecbebri village, at the post office. The monument consists of a grey stone with a plaque in black granite, with two Stars of David engraved and an inscription in Latvian and English: “In commemoration of Jews of Bebri: the Birins and the Fridmans families, murdered in July 1941”.