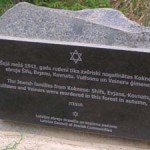 Clear information about the course of the Holocaust in Koknese is not available. The site of murder in the Paugi Forest, where approximately 15–16 Jews of Koknese were shot, was discovered by a local resident in the autumn of 1941.

In 2006 the Council of Jewish Communities of Latvia erected a monument on the site of murder – a stone with an inscription in black granite in Latvian and in English: “The Jewish families from Koknese: Shifs, Evjans, Kovnats, Vulfsons and Veiners were murdered in this forest in autumn, 1941”.