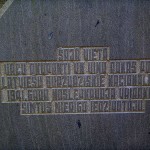 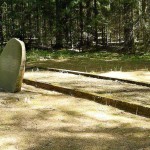 When the Nazi troops entered Litene in 1941, all Jews of the village were arrested and together with Jews from Rugāji and Balvi vicinity were placed in the Litene Manor, but later – in the former barracks of the Latvian Army. At the end of July also the Jews of Gulbene were brought to Litene. At the beginning of August the German SD unit (“Arājs’ Commando”) with the assistance of local self–defenders shot all Jews in the nearby forest (approximately 450 m from the barracks). Approximately 200 Jews were shot in total.

During the Soviet period on the site of murder behind the former barracks of the Latvian Army a monument was erected, it bears an inscription in Latvian: “In this place German occupants and their henchmen Latvian bourgeois nationalists in 1941 murdered a couple of hundred civilians”.