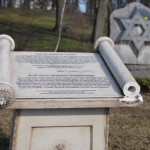 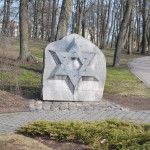 The Old Jewish Cemetery at 2/4 Līksnas Street was included in the territory of the Rīga Ghetto, set up in 1941. While the ghetto existed, Jews, who had been executed, had committed suicide or had been murdered during Rumbula actions (on 30 November and  8 December 1941) were buried here, the total number reaching 2000.

After World War II the remaining tombstones were stolen, whereas the high brick walls were demolished by  the Office of Renovations and Construction of Riga City Moscow District  for its own needs.  To “solve” this problem, the local government transformed the Old Jewish Cemetery into the Park of Communist Brigades in 1960.