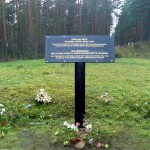 In March of 1942 and the summer of 1944 approximately 13 000 people were murdered in the Dreiliņi Forest, among them West European Jews deported to Riga and prisoners of the concentration camp Keiserwald.

In the 1950s–60s a memorial sign was erected in the Dreiliņi Forest – a metal rail with a small plaque of veneer, stating in Russian and in Latvian: “Here, in the Dreiliņi Forest from 1941 to 1944 fascists brutally murdered approximately 5000 Soviet people.” In later years the veneer plaque fell from its support, and the place turned into an illegal dump. At the beginning of the 1980s a new plaque was installed, with more accurate number of people who had perished there; however, it was broken and defiled as well. The last memorial plaque was erected in 2010.