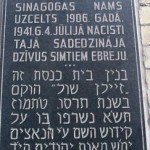 On 4 July 1941, as the result of an action organised by the Nazis, a synagogue at 63 Stabu Street was burnt down; during the fire Jews were inside the building. An exact number of Jews who perished is not known.

At present a memorial plaque has been placed on the former synagogue building with an inscription in Latvian and Hebrew: “The building of synagogue was constructed in 1906, on 4 July 1941 the Nazis burnt alive hundreds of Jews in it.”