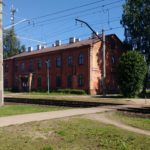 At the railway station “Šķirotava” the selection of Jews deported from other European countries was conducted. Three large mass graves are located in the territory of the station, where approximately 2000 murdered old and feeble people have been buried. Later a new railway line was constructed upon the burial places, which still exists today.