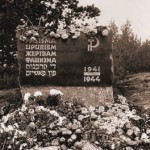 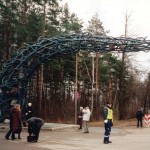 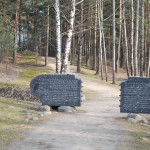 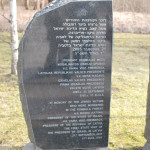 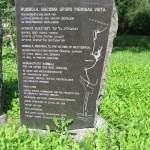 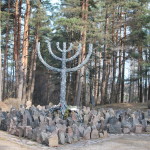 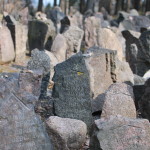 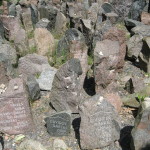 Rumbula is one of the largest sites of mass murders of Jews in Europe. During two actions – on 30 November and 8 December of 1941, which were carried out pursuant to the decision by the Nazi Government to totally annihilate all Jews imprisoned at the Rīga Ghetto, more than 25 000 thousand people were shot in the Rumbula Forest, among them approximately 1000 Jews deported from Germany. In 1944 also a couple of hundred men from Kaiserwald concentration camp were killed in Rumbula.

The first attempts to immortalize the memory of murdered Jews date back to the end of the 1960s. Despite restrictions imposed by the Soviet power, thanks to the initiative of some Jews, in 1963 a memorial plaque with an inscription in Yiddish was placed on a pine in the Rumbula Forest, whereas a large–size poster by artist Joseph Kuzkovsky “The Jew” was placed on the side of Rumbula railway (close to the railway line Rīga–Moscow). The poster depicted a figure of a man, who is seemingly rising from the grave, with his fist clenched, symbolising a protest against these crimes. Both the memorial plaque and the poster were removed already in 1964; however, Jews succeeded in obtaining a permit to place a memorial stone with an inscription “To the Victims of Fascism” not only in Latvian and in Russian, but also in Yiddish.

On 29 November 2002 a memorial ensemble, designed by architect Sergey Rizh, was unveiled in Rumbula. It was created with financial support granted by institutions of Latvia, Israel, the USA and Germany, as well as by private persons.

On the side of the motorway, at the road leading to the memorial, a metal construction, symbolising the force of Nazism, has been installed as a sign. A stone with an explanation that thousands of people were driven into death along this road is placed adjacent to it. At the entrance into the memorial itself a number of stone plaques with inscriptions in Latvian, English, German and Hebrew provide an insight into the events of Rumbula tragedy and the history of memorial. In the central part of the square, which has been designed in the form of the Star of David, a menorah, a seven–branch candlestick, rises, surrounded by stones with the names of Jews murdered in Rumbula carved into them. In some stones paving the square names of the streets in the former Rīga Ghetto are engraved. A number of mass graves are located within the territory of the memorial, marked by rectangular concrete borders.