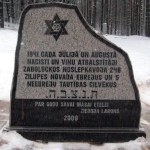 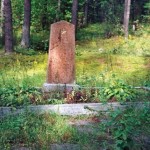 Upon arrival of the Nazi troops in Zilupe in July 1941 imposing of restrictions upon Jews started – orders to do hard manual labour, wearing the yellow star, etc. On 15 July the first campaign of shooting Jews was held in the forest near “Rakšini” village, but in August all Jews of Zilupe were convoyed to the forest in the vicinity of “Zabolocki” village in Briģi parish (approximately 1.5 km from Zilupe) and shot.

In 1961 on the site of murder near “Zabolocki” village a monument was erected – a stele in red granite with the five–point star and an inscription in Latvian and in Russian “Here in 1941 German fascists brutally exterminated civilians of Zilupe”. In 2009, thanks to the resources donated by Ilya Aron, a former resident of Zilupe, another memorial stone was erected, it bears the Star of David and a text in Latvian “In July and August 1941 Nazis and their supporters murdered 246 Jews from Zilupe municipality and 5 non–Jews in Zabolocki. Donated by I.Aron to honour his sister Ethel. 2009.”