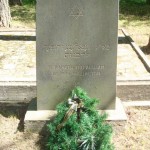 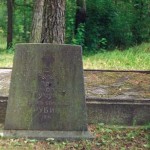 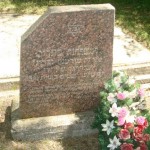 Upon arrival of the Nazi troops in Zilupe in July 1941 imposing of restrictions upon Jews started – orders to do hard manual labour, wearing the yellow star, etc. On 15 July the first campaign of shooting Jews was held in the forest near “Rakšini” village, but in August all Jews of Zilupe were convoyed to the forest in the vicinity of “Zabolocki” village in Briģi parish (approximately 1.5 km from Zilupe) and shot.

After the war the Jews that were killed near “Rakšini” village and the killed Jews from the vicinity of Zilupe were reinterred in the Zilupe Jewish Cemetery. Three monuments with the Star of David have been erected in the cemetery. One of them bears an inscription in Yiddish “To the murdered victims of Zilupe” and in Russian “In the memory of those killed by fascists hand of fascists, 1941”. The second monument has an inscription in Hebrew and in Russian “Fonarev family from Nirza, to Morteņi and Briģi ruthlessly murdered by fascists in 1941. To beloved farther Fonarev Moysey Selikowitsch, sister Tanya, born 1926. Beloved Heine. From son and brother. From Ida and Sonya”. The third monument has separates names of the deceased Jews in Hebrew and an inscription in Russian “In the memory of the Rubin family, 1941”.