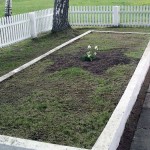 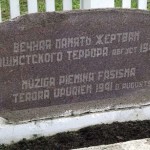 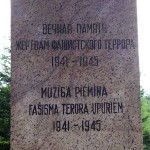 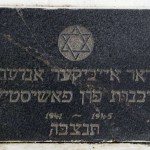 The Nazi troops entered Viļaka on 2 July 1941, and soon afterwards local self–defenders unleashed violence against Jews. In mid–July Jews of Viļaka were ordered to move to a provisional ghetto – a block between Liepāja and Balvu Street, but on 11 August mass–scale murders began – a German SD unit (“Arājs’ Commando”) with the assistance of local self–defenders convoyed Jews to a forest (approximately 1.5 km from Viļaka) and shot them (500 Jews in total).

In the 1960s, upon the initiative of victims’ relatives, the remains of murdered women and children were reinterred together with those of men, and two monuments were erected on the site of massacre. The largest monument – a stele in red granite with a white pedestal – bears the Star of David and an inscription in Yiddish, Latvian and Russian: “Eternal Remembrance to the Victims of Fascist Terror 1941–1945”. The smallest monument – a red granite stone – has an inscription in Russian and in Latvian “Eternal Remembrance to the Victims of Fascist Terror August 1941”.

Every year on the first Sunday of August a ceremony to commemorate the deceased is held.