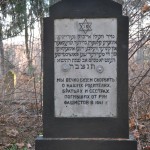 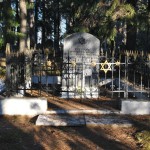 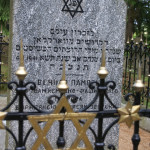 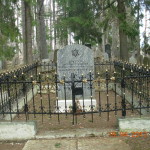 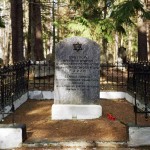 The troops of Nazi Germany entered Varakļāni at the beginning of July 1941, and already with the first days restrictions were imposed upon Jews and separate murders took place. A provisional ghetto was set up next to the Jewish Cemetery, where all Jews had to move to. On 4 August, German SD unit (“Arājs’ Commando”), with local self–defenders assisting, shot practically all Jews of Varakļāni (approximately 540 persons) in the territory of the Jewish Cemetery.

After the war the surviving relatives erected two monuments in the Varakļāni Jewish Cemetery. One of them is located at the fence of the cemetery, where the mass–murder of Jews took place. An inscription in Russian and Yiddish states: “We shall mourn eternally for our parents, brothers and sisters, who were killed by fascists in 1941”. The other monument is located inside the cemetery, in the place, where the murdered Jews were reinterred, it also bears an inscription in Yiddish and Russian: “Eternal remembrance to the victims of German–fascist terror – Jews of Varakļāni, brutally killed on 4 August 1942”.

Every year on the first Sunday of August a commemorative event is held at the Varakļāni Jewish Cemetery, dedicated to the Jews killed in Varakļāni.