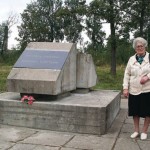 In the spring of 1943 the captured Jews, who had been hiding from the authorities of Nazi Germany (Katscherginsky’s family among them), as well as inhabitants of Stoļerova, Kaunata and Riebiņi, who fought against the occupation regime of Nazi Germany, were murdered in the Vipinga Forest.

A memorial plaque with an inscription in Latvian “Eternal Remembrance to the Victims of Fascism” was placed there in 1974 and was restored in 2000.