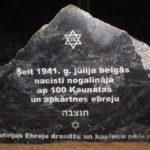 When at the end of July 1941 the Nazi occupation started in Kaunata, all Jews of the parish were arrested. A couple of days later shooting actions began, which continued until September. During this period local self-defenders shot approximately 100 Jews. Two sites of massacres are known – one is close to the Barki Cemetery, the other – near the Rāzna Lake.

In 2007 the Council of Jewish Communities of Latvia erected on the site of massacre at the Rāzna Lake (approximately 2 km from Kaunata) a monument with the Star of David and an inscription in Latvia “Here at the end of July 1941 Nazis murdered approximately 100 Jews from the vicinity of Kaunata”.