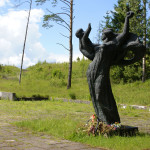 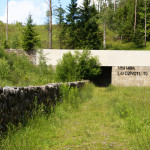 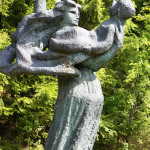 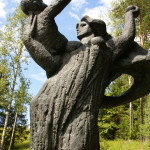 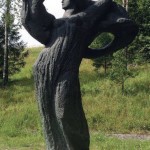 The troops of Nazi Germany entered Rēzekne on 3 July 1941. The first murders of Jews took place already on the following day, when more than ten young people from among the Jews gathered in Rēzekne market square were shot. A week later, for propaganda purposes, a group of Jews were ordered to unearth the victims of the Soviet power, and regular shootings of Jewish inhabitants began, lasting until September 1941. The shootings of Jews in the Ančupāni Hills took place from August to November 1941. During this period several thousand people were killed – Jews and people of other ethnicities from Rēzekne and its vicinity.

In 1973 a memorial was unveiled in the Ančupāni Hills to commemorate those murdered here, the inscription in Latvian states “They died so you could live”. The architect of the memorial is Alfons Kišķis, but the author of the central sculpture “Apple–tree” is sculptor Rasa Kalniņa–Grīnberga.