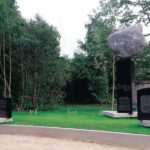 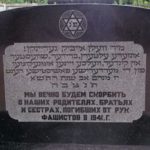 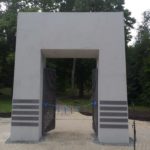 The Nazi troops entered Preiļi on 28 June 1941. Already at the beginning of July a number of orders that imposed restrictions upon Jews were adopted, but at the end of July arrests of Jews began. The arrested Jews were placed in the synagogue, and were taken in groups to be shot at the Jewish Cemetery of the town. The largest mass–scale shootings took place on 9 and 10 August, during these also Jews from the vicinity of Preiļi were killed.

During the Soviet period on the site of murder at the Jewish Cemetery a monument in black granite was erected, bearing an inscription in Yiddish and in Russian: “We shall mourn eternally for our parents, brothers and sisters, murdered by fascists 1941.” On 8 August 2004, upon the initiative of David Silberman (US), a former inhabitant of Preiļi, an engineer and a public figure, a memorial (author Sergey Rizh), financed by D. Silberman personally, was unveiled in the Cemetery. It consists of several obelisks with inscriptions in Hebrew, Latvian and English. Lines from the diary of Jewish girl Sheina Grama, who was shot in Preiļi, are engraved on the central obelisk. A capsule with the names of Jews from Preiļi, who perished in the Holocaust, is buried underneath the central obelisk. A separate memorial stele is dedicated to Vladislavs Vušķāns, the saviour of Preiļi Jews.

In 2015 another monument was added to the memorial – an arch, erected at the entrance into the cemetery, in form of a symbolic gate. Forms from ancient Egyptian architecture can be discerned in the shape of the arch, created as a reference to the story about Moses and the release of Jewish people from slavery in Egypt. Words from a prayer are written on the metal gate of the arch “Let their souls be bound up into the bundle of life”.