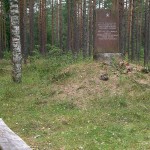 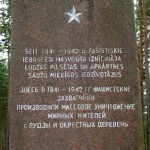 In 1961 on the site of massacre in the Garbari Forest a monument was erected with an inscription in Latvian and in Russian “Here in 1941–1942 the fascist invaders annihilated on mass–scale the civilians of Ludza town and of villages in its vicinity”.