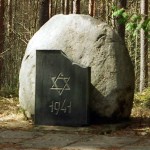 Annihilation of the Jews of Līvāni, following the Nazi occupation, began on 26 July 1941 and continued until 4 September. In July all Jews of the town were arrested and placed in a synagogue, and the same time a campaign of mass–scale shooting of Jews started (in total there were eight campaigns like these). One of these was organised in August in Rožupe Parish, in the Steķi Pine Forest, shooting approximately 30 Jews. In 1944 the Germans, retreating, destroyed the remains of the victims.

At the end of the 1980s the inhabitants of the parish erected in the Steķi Pine Forest on the site of murder a monument – a large boulder stone with a marble plaque with a broken corner, the Star of David and the year “1941” engraved on it.