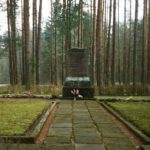 Annihilation of the Jews of Līvāni, following the Nazi occupation, began on 26 July 1941 and continued until 4 September. In July all Jews of the town were arrested and placed in a synagogue, and the same time actions of mass–scale shooting of Jews started (in total there were eight actions like these). On the evening of 26 July in the Grīva Forest the first action of murdering of Jews took place, 100 Jews from Līvāni who were convoyed there were shot, on 27 July approximately 70 were shot. Also 8–12 Soviet activists were killed together with the Jews in the Grīva Forest. In 1944 the Germans, retreating, destroyed the remains of the victims.

During the Soviet period on the site of massacre in the Grīva Forest a monument was erected with an inscription in Russian: “Eternal remembrance to the perished inhabitants of Līvāni, shot by German occupants 1941–1944. People, be vigilant.” A sign is placed on the roadside “Graves of Victims of Fascism”.