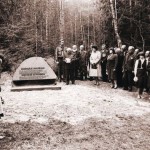 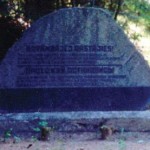 When the Nazi occupation began, at the beginning of July 1941, the Jews of Jēkabpils were arrested and placed in two guarded synagogues. At the end of July “self–defenders” of Jēkabpils and Krustpils transferred the Jews to Kūkas (approximately 15 km from Jēkabpils), where they spent approximately a fortnight in the barracks of the peat factory’s workers. On 10 August the Latvian SD unit (“Arājs’ Commando”), which had arrived from Riga, shot approximately 418 Jews in Kūkas swamp.

In 1958 the remains of people murdered in the Kūkas Swamp were reinterred in the Jēkabpils Old Jewish Cemetery, but in 1988 a monument was erected at the site of shooting with an inscription in Latvian and Russian: “Passer–by, stop! Here in August 1941 German fascist invaders and their accomplices murdered 418 Soviet citizens – the elderly, women and children”.