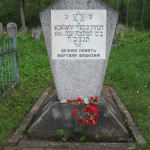 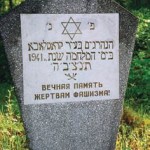 After the war, possibly, the Jews of Krāslava from various sites of massacres were reinterred in the Jewish Cemetery, and a monument was erected, with an inscription in Russian “Eternal Remembrance to the Victims of Fascism” and in Hebrew “To the inhabitants of Krāslava, who perished during the war, 1941”, the Star of David and abbreviations in Hebrew, typical of Jewish tombstones, are also engraved on it.