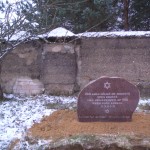 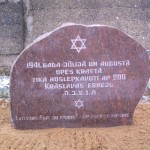 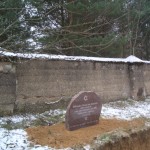 To commemorate those murdered next to the former turpentine factory, the Council of Jewish Communities of Latvia in 2008 placed at the bank of the Daugava River a monument in red granite with the Star of David and an inscription in Latvian “In July and August 1941 200 Jews of Krāslava were murdered on the river bank.”