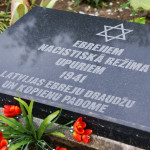 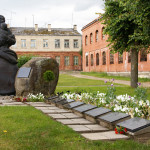 In 2003, upon the initiative of the Politically Repressed Persons of Krāslava District and with the donation by the Foundation of Canadian Latvians, a memorial was erected in the centre of Krāslava, dedicated to remembrance of all victims of terror of occupation powers (sculptors Indulis and Ivo Folkmanis). The memorial is a sculptural figure of a woman – a symbolic image of “Mother Latgale” – and seven stone plaques, each of them dedicated to a particular group of repressed persons: those deported on 25 March 1949 and 14 June 1941, victims of the Nazi regime of 1942–1943, participants of the national resistance movement and national soldiers, as well as national partisans and their supporters, dissidents – participants of non–violent resistance. A separate plaque was erected by the Council of Jewish Communities of Latvia; it bears the Star of David and an inscription in Latvian: “To Jews – Victims of the Nazi Regime. 1941”.