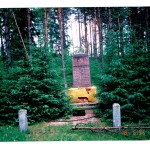 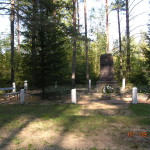 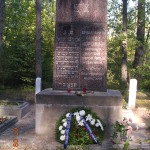 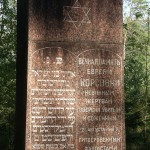 At the beginning of World War II about a half of Jewish inhabitants managed to leave Kārsava, approximately 2000 Jews were drafted into the Red Army. When the Nazi occupation began, on 20 July 1941, the remaining Jews of Kārsava were placed in a provisional ghetto (in a specific block of the town). Those Jews, who did not follow the order on moving, were shot. In August and the end of September mass shooting of Jews was organised. It was conducted by the local auxiliary police and a German SD unit in the Naudaskalns Brethren Cemetery (approximately 4 kilometres from Kārsava).

In 1957 a monument was erected on the site of massacre, its inscription in Russian and Hebrew states: “Eternal remembrance to the Jews of Kārsava – innocent victims, brutally murdered and burnt by Hitler’s fascists, 7 August 1941.” However, in 1970 the Executive Committee of Kārsava partially demolished the monument. In the present times, thanks to descendants of Kārsava’s Jews living abroad, the monument was restored.