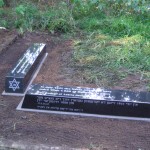 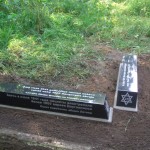 The Nazi troops entered Daugavpils on 6 June 1941 and already on the first days of occupation launched the campaign to exterminate the Jews of Daugavpils. Until 7 July 1125 Jews were arrested and taken to the prison, they later were shot in the Railwaymen’s Garden.

During the Soviet period a granite stele on a concrete base was erected here, it bears the inscription “Here the fighters, commanders of the Soviet Army, tortured to death by German–fascist invaders in 1941–1945 are buried. Eternal glory to those who perished.”

In 2007 the Council of Jewish Communities of Latvia placed a memorial sign – two black granite plaques with the Stars of David and an inscription in Latvian, Russian, English and Yiddish: “In July 1941, the Nazis executed here more than 1,000 of Daugavpils Jews”.