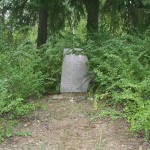 When the Nazi troops entered Baltinava at the beginning of June 1941, a few dozen Jewish refugees form Lithuanian and Soviet activists were arrested. On 19 July the local self-defenders convoyed the arrested Soviet activists, including a number of Jews and the Rabbi of Baltinava, whose links with Soviet institutions is questionable, to the forest at the Svātūne Lake (8–9 km from Baltinava) and shot them. The remaining Jews were arrested on 11 August and on the following day were taken together with Jews of neighboring parishes to the Balasta Swamp Forest (6–7 km from Abrenes, present-day Pytalovo) and shot (about105 persons in total).

After the war on the site of massacre at the Svātūne Lake a monument was erected, it bore a five-pointed star and an inscription in Latvia (at present the inscription is no longer legible).