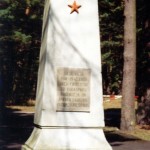 The Nazi troops occupied Ventspils on 1 July 1941. Arrests of Jews began on 13 July and continued for a couple of days. Jews that were arrested in the territory of the municipality (in Piltene, Zlēkas, Dundaga, etc.) were also brought to Ventspils. Part of arrested Jews were placed in a provisional ghetto – in a building on Kuģinieku Street, and were sent to do forced labour, but part of them – in the synagogue of the city. The first mass–scale murdering of Jews took place in the second part of July in the Kaziņas Forest; at the time a German SD commando with the assistance of local self–defenders shot 300 Jewish men. In August and September a couple of actions followed. The last one took place at the beginning of October, when the Latvian SD unit “Arājs Commando”, which had arrived from Riga, shot women and children (533 persons).

In 1959 a monument was placed on the site of July massacres – a white obelisk with a red five–point star and an inscription in Latvian and Russian: “In this place in 1941/1942 German fascists and their henchmen put to death and buried many Soviet citizens”.