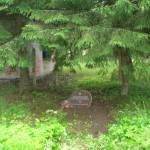 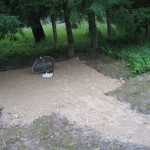 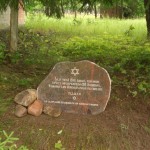 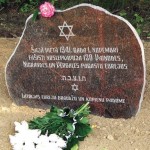 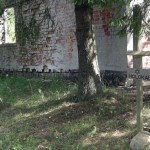 Compared to other settlements in the vicinity of Liepāja, mass murders of Vaiņode Jews occurred much later – on 1 November 1941. Arrests of Jews of Vaiņode and settlements in the vicinity – Nīgrande, Vērgale and Priekule – began at the end of October, but on 1 November all arrested Jews were taken to a place close to the Vaiņode airfield, where a Latvian DS unit that had arrived from Liepāja shot them (approximately 130 Jews in total).

In November 2001 Vaiņode local government placed a wood memorial sign close to the Vaiņode airfield, it bears the Star of David and an inscription in Latvian “1.11.1941. Holocaust”. In 2006 the Council of Jewish Communities of Latvia erected on the site of murder a memorial stone in red granite with two Stars of David and an inscription in Latvian: “In this place on 1 November 1941 fascists murdered 130 Jews of Vaiņode, Nīgrande and Vērgale parishes”. The remains of victims were reinterred in a nearby forest still at the time Nazi occupation; however, the exact location is unknown.