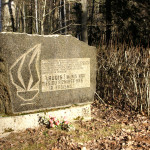 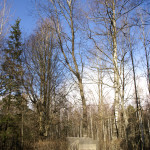 From 1943 to 1944 “Dondangen II”, a branch of the concentration camp “Kaiserwald, was located in Popervāle, Jews from various European countries and some Soviet prisoners of war were imprisoned there. Approximately 1000 people died in there – because of executions and poor living conditions. Victims were buried outside the concentration camp.

After the war a monument was erected on the former site of the concentration camp in Popervāle, which had an inscription in Latvian: “Here the territory of the former Popervāle concentration camp began, here from 1943 to 1944 German fascists humiliated, ruthlessly tortured and exterminated hundreds of Jewish people from the USSR, Czechoslovakia, Hungary and France. People! We have no right to forget what fascism is.”