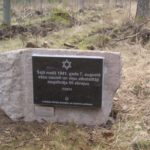 The beginning of July 1941, when the Nazi troops entered Valdemārpils, was the onset of imposing restrictions upon Jews – expropriation, order to wear the yellow circle, etc. Approximately 50–60 Jewish men of the town, who were capable of work, were sent to Mežgravas (approximately 5 km from Valdemārpils) to dig peat, where they were shot on 7 August. The remaining Jews were arrested at the end of July and placed in buildings on Kr. Valdemārs Street, from where on 26 July self–defenders from Talsi took them to a forest near Jaunciems–Kaltene road and shot them (approximately 70 Jews).

In 2007 the Council of Jewish Communities of Latvia erected a memorial stone on the site of massacre in Mežgravas (approximately 100 – 150 m from Medņi Farmstead, it bears an inscription in Latvian: “In this forest on 7 August 1941 German Nazis and their supporters killed 56 Jews”.