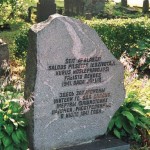 The Nazi troops entered Saldus on 29 June 1941, and already on the first days of July local self–defenders arrested approximately 100 Jewish men of Saldus, who soon afterwards were shot in the Veide Forest (approximately 1 km from Saldus). A couple of days later arrests of remaining Jews of Saldus began. The arrested Jews (approximately 200 persons) were imprisoned in the Saldus Prison and synagogue, from where they were later convoyed outside the city to a forest in Ciecere parish near the Baltezers Lake (approximately 4 km from Saldus), where they were shot by a German SD unit, assisted by local self–defenders.

In the 1960s the Jews of Saldus, who were killed in Veide forest and at the Baltezers Lake, were reinterred in the Saldus Jewish Cemetery, where a monument was erected, it bears an inscription in Latvian and in Russian: “Here rest the residents of Saldus town, murdered by fascist henchmen in July 1941”.