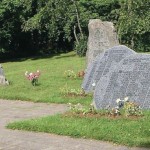 The Nazi troops entered Rucava at the end of June 1941, and already soon afterwards – on the last days of June – a German SD commando shot all Jews of Rucava (10 persons) in the Rucava Forest.

In 1991 in the centre of Rucava the local municipality created a memorial to residents of Rucava, who had died in fights to liberate Latvia, those who died or became missing during the first and the second World War, as well victims of Hitler’s and Stalin’s repressions. The memorial consists of a number of commemorative stones with the names of deceased engraved on them. The names of 10 Jews, who were shot, are among them.