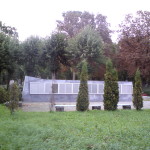 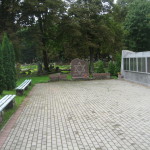 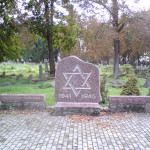 The Nazi troops occupied Liepāja on 29 June 1941. Already on the following days many Jews were arrested, of whom 300 were shot together with “Soviet activists” in the Rainis Park. A number of orders were issued that imposed restrictions upon Jews: wearing the yellow sign, prohibition to visit public institutions, etc. The first mass–scale killings of Jews took place in July in the vicinity of fishing port – at the lighthouse and at the fish cannery factory (1200 Jews were shot during it), but the largest action of shooting Liepāja Jews took place later – in December in the Šķēde Dunes (approximately 15 km from Liepāja). On 1 July 1942 a ghetto was established in Liepāja, the surviving Jews had to move to it. It was closed in October 1943, when all the surviving Jews were taken to the concentration camp “Kaiserwald” in Rīga.

Soon after the murder, the Jews, who had been shot in Rainis Park, still during the period of Nazi occupation, were reinterred in the Liepāja Jewish Cemetery. In 1993 on the site of reinterment a granite stone with the Star of David and an inscription in Hebrew and Latvian “To the Jews of Liepāja – Victims of Fascism. 1941– 1945” was unveiled. In 2004 next to it, thanks to donation by Edward Anders (US), a Holocaust survivor, a memorial wall was installed, with 6428 names of Jews of Liepāja, who died during the Holocaust or in Soviet “correctional camps”, as well as 46 names of the saviours of Liepāja Jews engraved on it.