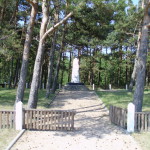 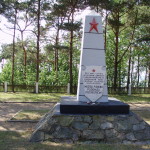 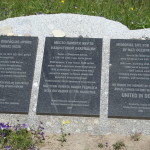 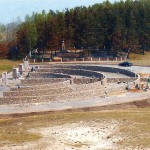 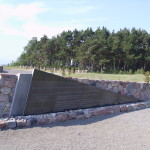 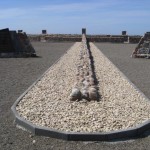 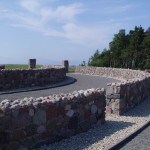 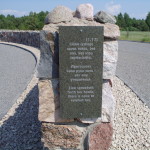 The Nazi troops occupied Liepāja on 29 June 1941. Already on the following days many Jews were arrested, of whom 300 were shot together with “Soviet activists” in the Rainis Park. A number of orders were issued that imposed restrictions upon Jews: wearing the yellow sign, prohibition to visit public institutions, etc. The first mass–scale killings of Jews took place in July in the vicinity of fishing port – at the lighthouse and at the fish cannery (1200 Jews were shot during it), but the largest action of shooting Liepāja Jews took place later – in December in the Šķēde Dunes (approximately 15 km from Liepāja). The first shooting Jews in the Šķēde Dunes took place in September 1941, a couple of hundred persons were shot during it, but the largest action occurred in December 1941, when in the course of three days the majority of Liepāja Jews were murdered (more than 2700 persons). In February 1942 approximately 150 more Jews were shot in the Šķēde Dunes.

Several monuments are located in the Šķēde Dunes. One of them was erected in the Soviet period, it has an inscription in Latvian and Russian: “Here in 1941–1945 Hitler’s invaders brutally murdered more than 19000 residents of Liepāja. Eternal Remembrance to the Soviet Patriots”.

The memorial (sculptor Raimonds Gabaliņš) was created in 2005, thanks to the initiative of the open public foundation “Liepāja Jewish Heritage” and was unveiled in 4 June 2005. It was created in the form of a stylised menorah, inlaid with cut boulder stone of Kurzeme. The flames of menorah are granite pillars with lines from “Eichah” (Lamentations of Jeremiah) in Hebrew, English, Latvian and Russian. Every December a moment of commemoration is held at the memorial, dedicated to the anniversary of eradication of the Liepāja Jewish community.

In 2006 a commemorative plaque was added to the memorial, it is dedicated to the remembrance of all victims of the Nazi occupation and has inscriptions in Latvian, Russian and English that specify the number of victims.