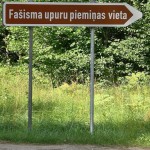 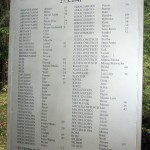 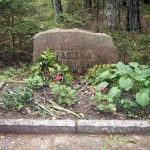 The Nazi troops entered Grobiņa on 22 June 1941, and on the following day murdering of Jews started, during which the German SD shot six persons in the Jewish Cemetery. Mass-scale murders took place in the autumn, when part of Jews were taken and killed not far from the church (exact location is not known), but part – on 27 October in the Iļģi Forest.

During the Soviet period on the site of murder in the Iļģi Forest a memorial stone with an inscription in Latvian: “Graves of the Victims of Fascistic Terror” was erected. On 18 August 2006, thanks to Henry Blumberg (Canada) and Donald Hirschhorn (US), relatives of victims from Grobiņa, as well as Grobiņa City Council, a memorial plaque was unveiled next to the monument from the Soviet times, it bears the names of 87 murdered Jews from Grobiņa and an inscription: “No one is dead, until memories of him are alive”.