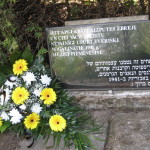 The Nazi troops entered Aizpute on 28 June 1941. Some Jews were shot already at the begging of June in the Dzirkaļi Forest and the town park, but other Jews of the town and its vicinity were arrested and placed into two synagogues of the town. Mass murders of Jews were conducted in two actions. During the first one on 24 July the local self–defenders shot 39 Jews of Aizpute in the Padure Pine Grove of Laža parish. The second killing took place on 27 October, when the German SD unit that had arrived from Liepāja shot 386 Jews in a forest not far from the farm “Dzirkaļi” (approximately 3 km from Aizpute).

After the war the remains of Jews, who were shot in the forest not far form the far “Dzirkaļi” were reinterred in the Misiņkalns Graveyard in Aizpute. At present a monument has been erected on the site of reinterment, it bears an inscription in Hebrew and Latvian: “Here rest the Jews of Aizpute and other innocent victims of Nazis, brutally killed in 1941. Eternal Remembrance”.